Quid Pro Quo is a high-stakes, fast-moving legal thriller about real people, and funny people at that. Cyril MacIntyre’s mother is a twenty-eight-year-old ex-street kid who drags her son to all her law school classes, then proceeds to get herself kidnapped. That aside, Cyril’s life isn’t too different from that of other thirteen-year-olds. He has all the usual adolescent issues to deal with: parent problems, self-esteem problems, skin, hair and girl problems. He just has legal problems too. And he’s got to solve them if he wants to save his mother’s life.

“The kind of timing, pacing, dead-pan one-liners, and punchy humour that a seasoned stand-up comic would envy. Both real and funny.”
Quill & Quire, starred review

“A thoroughly engaging whodunit!”
The Globe and Mail

“Funny, clever! Four and a half stars.”
Today’s Parent

“Humor, wackiness, intelligence, and suspense – what else would we wish for?”
KLIATT 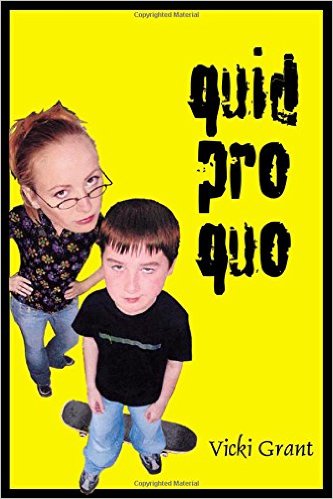