A High-Low Comic Thriller for Middle-Schoolers

Emery’s neighbour, Richard, is the kind of kid who gets under your skin. When Richard suggests a game of “Nicky Nicky Nine Doors,” Emery can’t come up with a good excuse not to play. Using chocolate bars as “stunt poo,” the boys start playing the classic prank of the burning bag on the doorstep, but this game has a modern twist. They videotape their neighbour’s reactions. The naked guy and the man in the apron are highly entertaining, but Emery starts to get cold feet when another neighbour is reduced to tears. Emery wants out, but he’s not sure how to stop the game without losing face. Soon the game gets serious, and Emery has a lot more to worry about than his reputation.

“Vicki Grant has done it again: she’s come up with another great hi-lo teen novel that is almost certain to garner accolades equal to those which her past efforts (all ALA “Quick Picks” books) have earned. NINE DOORS…boasts a plot that’s simple yet gripping, pacing that’s tight and rapid-fire, and true-to-life characters that will resonate with readers both young and old…On top of its absorbing storyline and sharply-drawn main characters who undergo believable changes, NINE DOORS even has a splash of romance thrown in – truly a fantastic all-round read that is a sure bet for grabbing the interest of reluctant readers.”
CM Magazine

“No one creates more likable, fully rounded characters than Vicki Grant’s protagonists and “good guys”. Her central characters are memorable individuals whose comments clearly show their views of the world and the motivations and interconnections between them and their allies.”
The Virtual Bookmark 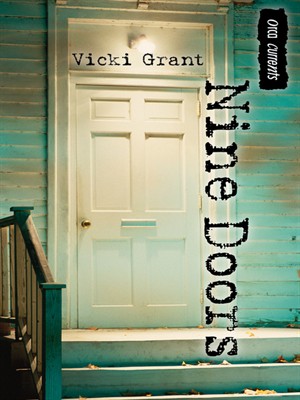