Another Novel in the Quid pro Quo Series

Cyril MacIntyre, son of firebrand lawyer Andy MacIntyre, smells something fishy about one of his mother’s cases. And it’s not just that there are sea lice in the coffee. When Cyril starts investigating the death of a millionaire inventor, he gives a whole new meaning to the term “legal aid.” Long on smarts and short on—well, just plain short, Cyril tangles with deranged criminals, indulges in a little bit of B & E and confronts the scariest person in the world – his mother.

“…a delightful, page-turning stand-alone sequel to QUID PRO QUO…(The) mix of wisdom beyond his years and familiarly realistic teen concerns makes Cyril a winning, engaging narrator. The door is left open for another sequel or two, which detective-loving teen readers will surely gobble up.”
VOYA

“Grant has created strong, thinking characters that are both engaging and intriguing…The author’s plot development is fast-paced, well-crafted and fun, and makes the whole novel one suitable for even less enthusiastic readers. Highly recommended for twelve years old and up. Do yourself a favour and purchase the previous book of this series – QUID PRO QUO.”
Resource Links

“The novel features laugh-out-loud bits between mother and son and plenty of hilarious insights from Cyril about life and the law. Students who enjoy quick-witted writing and good mysteries will enjoy how well Vicki Grant cracks the case…Highly recommended.”
Library Media Connection

“Funny and clever, with twists and turns in the plot and just a bit of serious thrown in, RES JUDICATA is a worthy sequel to QUID PRO QUO and fans will be left wanting more of Cyril and Andy.”
Canadian Children’s Book News 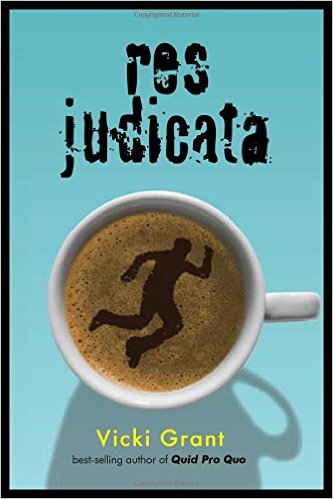